How to Make an R REST API: A Beginners Guide to Plumber

REST APIs are everywhere around us. Software engineers use them to develop backend logic, and data scientists use them to deploy machine learning models. But what exactly is a REST API and should you as a data professional know how to code them from scratch? The answer is unquestionably yes, and you’ll why (and how) shortly.

Today you’ll learn how to make a basic R REST API with the plumber package. It’s an R package that makes it easy to write R REST APIs and documentation around them. In this article, we’ll make a REST API around the well-known Gapminder dataset.

Completely new to R? Check out our detailed R tutorial for programmers.

Jump to a section:

REST stands for “Representational State Transfer”. In simpler words, it represents a set of rules that developers follow when creating APIs. The most common rule is that you should get a piece of data (response) whenever you make a request to a particular URL.

The request you make is made of four components:

Most of the time, the response returned after making a request is in JSON format. The alternative format is XML, but JSON is more common. You can also return other objects, such as images instead. You’ll learn how to do that today.

R allows you to develop REST APIs with the plumber package. You can read the official documentation here.

It’s easy to repurpose any R script file to an API with plumber, because you only have to decorate your functions with comments. You’ll see all about it in a bit.

You can place two roxigen2-like comments for specifying API title and description. These two aren’t mandatory, but you shouldn’t skip them. Here’s how the entire code snippet (imports, name, and description) looks like:

The idea behind this endpoint is that it should return countries and their respective data after a couple of filters are applied. To be more precise, this endpoint accepts parameter values for continent, life expectancy, and population. Value for continent must be exact, and values for the other two parameters filter data so that only rows with greater values are returned.

If you want to do things right, it’ll require many comments, as you’ve seen previously. It’s a good practice to write a short description, and list the parameters, and it’s mandatory to specify the request type and the endpoint.

Below the comments, you’ll place a function that performs the necessary logic and returns the results.

Let’s think about the parameters for a second. You’ll need:

All three are mandatory, and you can do the filtering based on the parameter values with the dplyr package. This endpoint will return data for the most recent year only, which is 2007.

If you were to run the API now, this is what you’d see:

The endpoint on the bottom of the image (blue box) is clickable. Clicking on it expands a whole another section:

Image 2 – Documentation for the /countries endpoint

You can click on the “Try it out” button to make a request straight from the browser. You’ll have to fill in the parameter values then; let’s say like this: 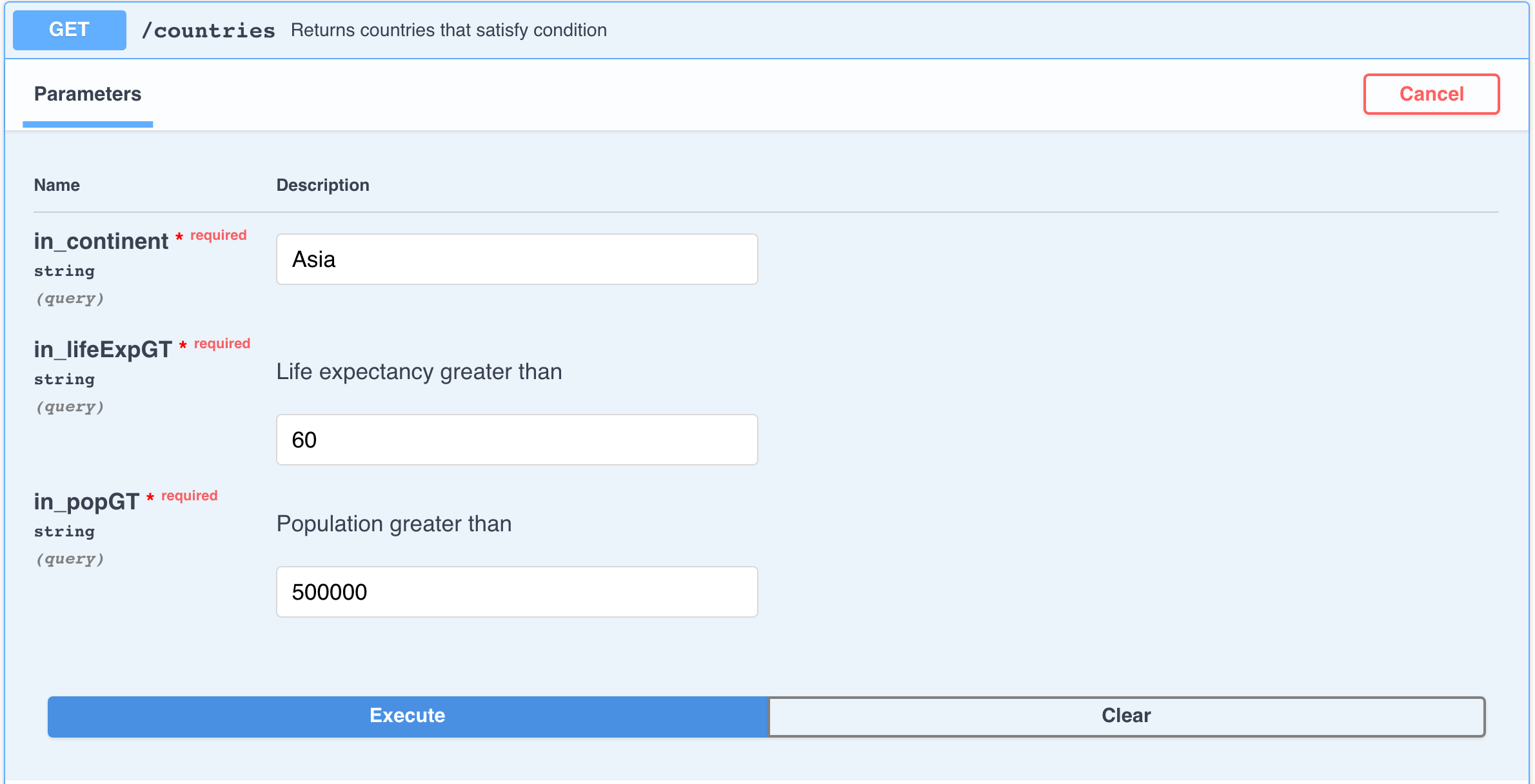 Once you click on the “Execute” button, the response will show below. Here’s what it looks like in this case:

And that’s your first endpoint! It takes data in and returns data out. But what if you want to return something else? Like an image, for example. You’ll learn how to do that next.

This endpoint will be quite different. The goal now is to return an image instead of raw data. The image will contain a line plot made with ggplot2, showing life expectancy over time.

Two parameters are required – country and chart title – both are self-explanatory.

If you want to return an image from an API with R, you’ll have to put the following comment: #* @serializer contentType list(type='image/png'). Everything else is more or less the same.

Regarding the visualization, a subset is made from the original dataset containing only records for the specified country. A simple line and marker plot are then made from the dataset.

The problem is – you can’t return a ggplot2 visualization. You’ll have to save the image with the ggsave() function and then return it with the readBin() function.

If you were to run the API now, a new endpoint would immediately catch your attention:

You can once again click on the “Try it out” button to test the functionality. Let’s see how life expectancy changed over time in Poland:

Once you click on the “Execute” button, you’ll be presented with the following visualization:

And that’s how you can return an image in the API response. You’ve only created endpoints with the GET method so far. You’ll learn how to work with POST next.

You’ll now learn how to work with POST methods (or any other sends data in the request body). The goal is to create another endpoint that calculates the total GDP for a specified country in the latest year (2007).

The only parameter you’ll need is the country.

Once you have this value, you can use dplyr and the summarize() function to calculate the total GDP. Here’s the entire code snippet:

If you were to run the API now, you would instantly see a new box, which is green this time, indicating the POST method:

You can once again click on the “Try it out” button to test the functionality:

Image 10 – Testing out the /calculate_gdp endpoint

Image 11 – Testing out the /calculate_gdp endpoint for Poland

Once you click on the “Execute” button, you’ll be presented with the following response:

The only difference here between GET and POST is that you can’t put parameters and their values in the URL for the POST. The parameters and values are passed in the request body as JSON.

You now know how to wrap your R code into a simple REST API. Let’s wrap things up next.

You’ve learned a lot today – what REST APIs are, what’s the deal with the plumber package, and how to use it to build basic APIs in the R programming language.

APIs in R are commonly developed for exposing the predictive functionality of machine learning models. You can do other things, of course (as demonstrated today), but R probably isn’t the best language for doing so. You’re probably better of with Java, Go, or JavaScript if that’s the case.